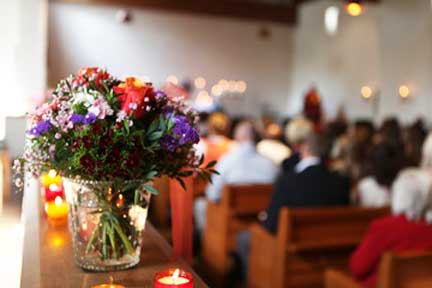 A funeral wake or sometimes referred to as "visitation" and is a small gathering held prior to the funeral service.

Catholic denominations often hold a "rosary" prayer vigil during the wake which is normally held during the evening hours. Friends and family may send flowers or gifts and the family may request a donation in lieu of flowers. Friends who are members of another parish may request a mass for the resting of the deceased soul. This is usually followed by sending out mass cards to the family.

The Roman Catholic funeral ceremony often begins in the funeral home for the wake or visitation service, followed by a Catholic mass held in the church (typically with the body in the casket present.) The funeral casket is closed during the mass. The funeral service ends at the grave site after a liturgy is performed. According to Wikipedia, "a liturgy is the customary public worship done by a specific religious group, according to its particular traditions."

Some families also opt to distribute prayer cards with a Catholic prayer on the reverse side. You can view our prayer card templates as well for cards you can easily create quickly with beautiful results.

Don't forget to check our our online store to see a variety of styles and designs perfect for the Catholic funeral service.