For a Church Member After a Long Illness ~ He Still Speaks Hebrews 11:1-4 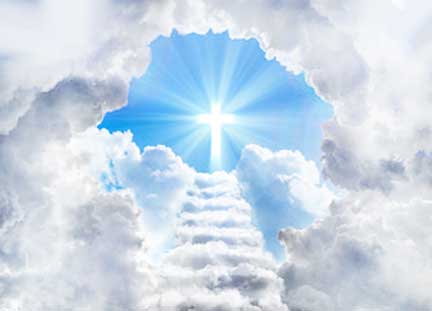 The seeming finality of a time like this hurts. When you're dead, you're dead, and that's all there is to it - at least that's what it seems like to those who are left. But although death seems like the end to earthly life, it isn't. To be sure, life continues with the Lord in a brand-new sphere for Joan and all God's precious children. But more remains for us here, too.

What we just read from the eleventh chapter of Hebrews begins a marvelous passage known as "Faith's Hall of Fame." It lists great Old Testament heroes and their accomplishments in God's eyes. At the head of the long, glorious list is Abel from the fourth chapter of Genesis.

You recall the story of Cain and Abel, two children of Adam and Eve. They'd been instructed about proper worship and sacrifices. Abel followed God's instructions, but Cain didn't. The Lord called Cain to task for his failure. Cain became angry and jealous, and he killed Abel - the world's first murder.

What does it say about Abel in Hebrews? "By faith Abel offered to God a more acceptable sacrifice than Cain's. Through this he received approval as righteous, God himself giving approval to his gifts; he died, but through his faith he still speaks" (11:4).

What a message! Long after our tongues are silent in death, we still speak to the living. Abel and Joan both continue to speak in three ways.

First, they speak of the necessity of faith. "By faith, Abel offered to God a more acceptable sacrifice." The only reason Abel offered any sacrifice was his faith. A sacrifice by definition is something costly and worthwhile, something we'd rather not part with. That's what makes it a sacrifice.

Joan would agree wholeheartedly. She, too, believed in a living, loving Lord, and that was evident in how she lived. As you know, Joan spent her last months in bad health, unable to participate in routine activities. She was frustrated and no doubt angry at times. But she never lost her faith. She was never concerned that the God she loved and served wasn't worthy of that love and service. Both Joan and Abel still affirm the necessity of faith.

A second thing they both still speak of is the importance of worship. Abel knew that an occasional tip of the sacrificial hat wasn't enough. Abel took his God seriously and abided by his instructions. Abel's message is that worship has meaning and value. It's our heartfelt response to God, and it also lets the world know whose side we're on.

Joan did that with her life, too. Until her illness prevented her from participating, she was a regular at church services. But her worship extended beyond Sunday mornings. [Here might be inserted additional activities in which the deceased was involved.] That was worship for Joan: a lifestyle that was worshipful in everything she did. Joan still speaks of the necessity of worship.

Finally, Abel and Joan still speak to us of the necessity of being prepared to die. Abel was prepared because he lived a righteous life in God's eyes. He was prepared to meet his Maker in the only way someone could prepare who never lived to see the Redeemer.

Joan's preparation was different. She grew up hearing: "All have sinned and fall short of the glory of God" (Romans 3:23). But she also heard: "For God so loved the world that he gave his only Son, so that everyone who believes in him may not perish but may have eternal life" (John 3:16).

She also heard "For by grace you have been saved through faith" (Ephesians 2:8), not by sacrifices, not by coming to church, not by serving on committees, not by giving generously, but by grace - God's unmerited favor. Joan appropriated that gift for herself by believing in Jesus as her Lord and Savior. That's the best preparation for death anyone can make. Joan is still speaking, and she's telling us to be ready.

Joan is still speaking. She speaks of the necessity of faith, the importance of worship and the need to be prepared. As Jesus said, "I am the resurrection and the life. Those who believe in me, even though they die, will live" (John 11:25).

Abel and Joan would add "and speak." Speak then, Joan. We're listening.