For a Musician ~ God's Improvisation Romans 8:28 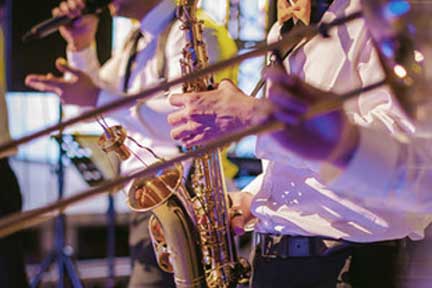 One night the great jazz trumpeter Wynton Marsalis was playing a gig at the small Village Vanguard club in New York. He was playing the soulful, mournful ballad "I Don't Stand a Ghost of a Chance With You."

At the song's most heart-rending point, a cell phone chirped to life, fully wrecking the moment. This rude interruption should have killed the mood and ruined the gig. After all, giants of the music world like Marsalis shouldn't have to put up with interruptions. You hardly could blame him if he had walked off the stage.

After a few seconds, however, Marsalis did something amazing. Without missing a beat, he picked up on the tune of the cell phone's ring and incorporated it into the song he was playing. He performed variations on it - blending it with what he'd planned to play - and then drew the whole ballad back to the original theme.

The stunning result brought down the house. Wynton Marsalis transformed a rude interruption into a moment of glory. He didn't allow an unexpected shock to stun or silence him. Instead, he turned this setback into a comeback.

That's what good musicians do.

We gather today because life has been interrupted. The discordant, shrill ring of death has seemingly overcome the music and melody of life. Phones rang around the country this past week when Bill died. The phone here at church has been ringing incessantly with people wanting news. Hearing and experiencing death's ring makes us angry and frustrated. We want to know who's responsible for this interruption. Death makes us wonder whether we'll ever have a "ghost of a chance" of understanding, of getting back in tune, of feeling the music once again.

But today we need to recognize that God is standing at the microphone - the God who improvises a different tune, a variation on a theme. We gather today because we recognize that somehow God, the master Musician, is able to take the ring of death and discord and turn it into life. That's really what resurrection is about. Jesus walked out of the tomb, showing us that even death doesn't stop the music. The song goes on, perhaps a bit differently, more improvised, more subtly beautiful, but it goes on.

The death of someone close to us can force us to quit, or it can be an opportunity for improvisation - to find new ways of celebrating life amid tragedy. In Romans 8:28, the apostle Paul put it this way: "We know that all things work together for good for those who love God, who are called according to his purpose."

That's a powerful image. No matter how hurtful, how tragic, how unfair or how out of tune we might feel, God can work variations on the theme of life within us and turn it into something beautiful. God's direction for us today is to follow his lead, to improvise, to start something new.

Music never dies. And because of God's promise of the Resurrection, neither do the people we care about. No tragic ring of the phone can interrupt that.