For an Elderly Woman Who Suffered Before Death - No More Pain Revelation 21:1-7 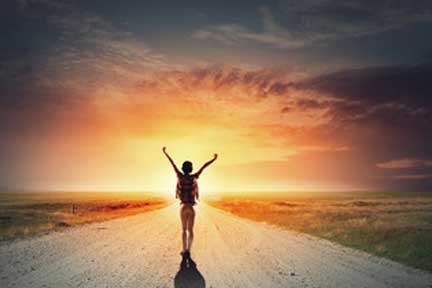 We've gathered today to celebrate Betty's life, and you're here because of your relationship to her and because of what she meant to you. She dealt with a lot of illness and pain in recent years, but now is the time to think of a fuller picture of Betty, recalling her not only as she wrestled with the discomfort and discouragement of illness but also when she was in the full strength of her life.

I make this point because when someone who'd been dealing with significant pain dies, our first thought is often that death has come as a relief. They're no longer suffering, and that's significant. But now it's also time to reflect on Betty's life in its larger context, when it was defined by being a vital mother, grandmother and friend. It's time to recall her life as a worker, a homemaker, a person who enjoyed needlework. Some of you have things she made - or needle skills she taught you.

You'll have those kinds of memories, but I came to know Betty only late in her life, when she was dealing with the restrictions of illness. The view I got was of an appreciative person. I suspect she also told you directly, but she often told me how much she appreciated you. She told me of how good her daughters and grandchildren were to her. She was glad for her friends. She was grateful for the care she got from the staff where she lived and from hospice workers who helped ease her final weeks.

A couple of times after I visited Betty, I received a card from her with a check in it, which at first baffled me. Receiving a check after a pastoral call is unusual. In fact, it had never happened to me before and certainly wasn't something I expected. I tried to give it back and sent word through her daughter that it was neither necessary nor expected. Betty wouldn't take it back, and as I came to know her better, I realized this gift was a consistent piece of who she was - a person who looked for ways to let the people around her know she appreciated what they did.

The Scripture passage I read from Revelation, which is a vision of the next world, has special meaning in the face of this beloved woman's death. It affirms that the pain and discouragement that came with Betty's illnesses haven't gone with her into eternity. There, the Scripture promises us, God himself will be with us, wiping every tear from our eyes. "Death will be no more; mourning and crying and pain will be no more, for the [former] things have passed away."

But this passage doesn't describe eternity merely in terms of what it is not but also in terms of what it is - a place where all things are new. True, these verses use the language of metaphor, for they talk of drinking the water of life, the living water that Jesus spoke of during his time on earth. But that metaphorical language is used because it's impossible to convey in any earthly language the actuality of heaven's blessings.

A song that came out of the Great Depression era also tries to describe the indescribable heaven through metaphors. "The Big Rock Candy Mountain" imagined a place where there was a "soda water fountain" and "lemonade springs where the bluebird sings" and where you can stay without money. The song is about that longing for the perfect land and easy living, where everything goes right all the time; where there are no headaches or heartaches or trips to the doctor or complaints from the boss - just pure, unadulterated joy all the time. It all has an unreal quality about it, but that's because anything that's heavenly is beyond our ability to describe in realistic terms. Metaphor is the best we can do.

Today, as we celebrate Betty's life, her appreciation of us calls us to continue being the kind of people she gave us credit for being. And now we commit her to God, in whose presence she can drink forever from the waters of life.